(The Southold OEM will open the secondary shelters if the magnitude of the event and or intensity of the storm require it. Notifications will be on the town website and local media.)


Schools were chosen as disaster shelter sites for several reasons. Schools are built to a stronger seismic code than most buildings, have gyms or other areas for sleeping, feature kitchen and rest room facilities for large numbers of people, and in some cases have generators.

THE TOWN'S SHELTERS DO NOT PROVIDE FOOD. 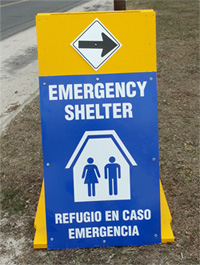