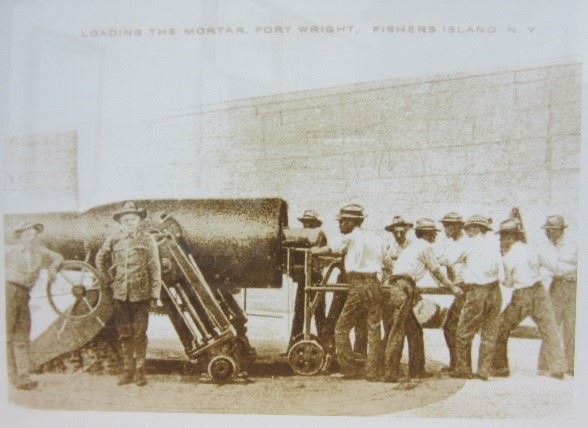 The Pequot Indians called Fishers Island “Munnawtawkit” but in 1614, Dutch explorer Adrian Block labeled the island on his map “Visher’s Island”.  It has been part of Southold since 1879 when a joint commission from Connnecticut and New York decided the legal boundary of Connecticut stopped at the shoreline.  The island lies about six miles northeast of Great and Little Gull Islands in Long Island Sound.  About seven miles long and one and half miles wide, it contains about 4,000 acres.

The General Court of Massachusetts granted Fishers Island to John Winthrop Jr. on October 7, 1640.   Winthrop lived only one winter on the island.  After being named Governor of Connecticut he used the island as a place to raise horses and goats.

Fitz John and Wait Still Winthrop inherited the island from their father and it stayed in private hands until the twentieth century.  The Winthrop family farmed the island for 218 years until Robert R. Fox bought it in 1863.   In 1889 the island was sold to Edmund and Walton Ferguson. In the 1890s, the United States Government built Fort H.G. Wright to help protect Long Island Sound from invasion.  Although Fishers Island has gradually been developed it remains a very private place.   The Henry L. Ferguson Museum in the heart of Fishers Island, annually mounts exhibits on various aspects of the island’s history.