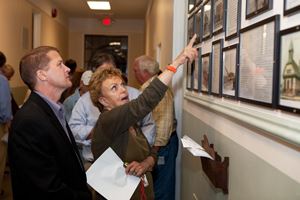 Supervisor Scott Russell and Antonia Booth are seen at the grand opening of the new Peconic Community Center. 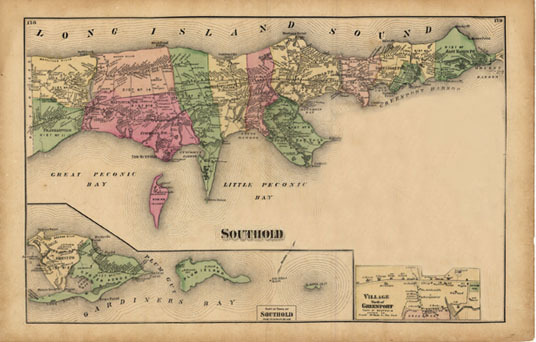 Displayed is a map showing Southold Town as it was in 1873.

Southold’s history begins like most of Long Island when the land was created by the retreat of the glaciers.  Eventually it was inhabited by the Algonquin people who lived across most of the northeast.

The first Europeans to settle here arrived in 1638 and established two small farms in the Hashamomuck area. It was not until 1640 that settlers arrived with the intent of establishing a community.  Reverend John Young originally from Southwold, England by way of Salem, Massachusetts, gained the backing of the Colony of New Haven, in what is now Connecticut to establish a “plantation” or sub-colony across Long Island Sound on the sparsely settled North Fork of Long Island.

New Haven Colony provided the funds to purchase rights to use the land from two sources, the local Native American Sachems and from James Farrett, the representative of Earl of Stirling, who was given the island by the British Crown. First known as Yennicott, the community flourished under the guidance of the church.   The government of Southold Town was formed in 1649, when the plantation felt established enough to purchase its independence from New Haven.

The town stretched across approximately 63 miles from Fishers Island to what is now Wading River.  In 1792, the town feeling that it was too spread out petitioned New York State to divide itself into two parts.  “…the reputed line of division between the parishes of Ocquebouge and Mattertuck; shall from and after the first Manday in April next, be erected into a distinct and separate town, by the name of River Head…”  [Laws of New York, chp 24 pg 286]

From that point to this Southold Town flourished as farming and fishing community.  Beginning in the mid- 20th century viniculture has become one of the largest crops of the north fork.  The many wineries have breathed new life into the agricultural landscape of the town and have made Southold a popular summer destination.